Marian Shrine “Our Lady of Peace“ 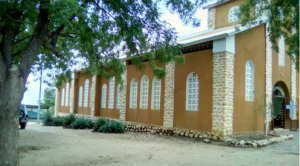 Located in the diocese of N’dali in northern Benin, the Marian Shrine Our Lady of Peace of Bembèrèkè is located in the Borgou department.

The genesis of this place of pilgrimage presents us with two fundamental dimensions. The first dates back to Fr. LouisO SMA (from the province of Italy) and the second to Monsignor Nestor ASSOGBA, then Bishop of Parakou, who established the pilgrimage.

Indeed, when Father Louiso, founder of the Mission of Bembèrèkè, built the church in the 1940s (the current shrine located between Gando and Bembèrèkè), he dedicated it to Our Lady of the Road.

But why such a name?

Not because it was a new parish, but because it made a stop for the truckers. There was an association of drivers leaving Parakou for Niamey. It was the RONDINE OPERATION that allowed him to linger in Bembèrèkè to pray. It’s about spiritual pause.

When Monsignor Nestor ASSOGBA in 1976 was appointed Bishop of Parakou, after the first apostolic visit of His Holiness Pope St. John Paul II in Benin, he had the intuition to found a place of diocesan pilgrimage. At that time, its diocesan territory consisted of the present dioceses of Parakou, N’Dali and Kandi. And there were only 15 priests and 4 religious communities to ensure the pastoral service of that great diocese. Wanting to entrust his diocese to the patronage of the Virgin Mary, he gladly listened to the advice of his collaborators during a presbyterian assembly. He said, “My fathers, I would like to establish a Marian pilgrimage in our diocese. What do you think? And where could we implant this place of pilgrimage?». After a long silence followed by a consultation, Bembèrèkè was chosen.

Simply because of the fact that the parish of Our Lady of the Road of Bembèrèkè was located in the center of the diocese, hence its geographical center. Moreover, at the time, in 1976, the parish canon was no longer on the current site of the shrine; the chapel was almost at the top of the mountain as we see it to this day.

Fr. Jean Thébault, then pastor, to be closer to the faithful for a pastoral of closeness, had built a new presbytery a little further down, about a kilometer away, where the present parish of Bembèrèkè is located. Later the chapel on the hill will be deserted to give way to the new church (the current one) built by the new parish priest Fr. Michel Iriquin. It was at this time that the chapel of the Shrine, then a parish church, was closed to worship. And this place of worship, already built of stone, was in danger of falling into disrepair. But the church was beautiful, with pillars in borasso. There were stained glass windows and roses that have their stories respectively. The Fathers had celebrated masses there for years.

Fortunately, when Bembèrèkè was chosen at the presbyterium as the annual pilgrimage site for the diocese, Monsignor Nestor ASSOGBA encouraged all pastoral agents to make it a common thing and therefore of the diocesan family. He really helped and went out of his way to begin the first pilgrimage to the current site. Thus the chapel resumed its spiritual life. Father Iriquin was entrusted with the material preparation for the reception and organization of this pilgrimage, which was precisely the parish priest on the spot.

As Abraham the first pilgrim in search of God in the spirit of obedience, to serve and proclaim him, all parishes were involved spiritually and materially for the success of that pilgrimage. Monsignor also placed this pilgrimage under the patronage of Mary giving him a Marian middle name: OUR SIGNORA OF THE STRADA AND OF THE PERMEATION.

According to Father Michel Bonnemaison SMA, one of the great pillars and missionaries of the mission of Bembèrèkè, founder of other parishes of Borgou, the reception and organization of the first pilgrimages to Bembèrèkè, was a great success. In other words, it was another extremely important step in the proclamation of the Gospel to the people of Borgou (of the three dioceses), also for the Batombou of the Kouandé and Wassa region.

When the diocese of N’Dali was created in 2000, the year of thanksgiving and the jubilee, the new Bishop Monsignor Martin ADJOU, also a great devotee of Mary, confirmed Bembèrèkè as a place of diocesan gathering and annual pilgrimage. And it will put it under the patronage of The Madonna of Peace of Bembèrèkè.

Today the Sanctuary is run by the Franciscan Friars of the Immaculate.

Who are the FRANCESCANI FRATS OF IMMACOLATA?

The Franciscan Friars of the Immaculate belong to a congregation founded by the Fathers Stefano Maria Manelli and Gabriele Maria Pelletieri, both initially members of the Order of the Conventual Minor Friars. It was recognized as the Clerical Institute and received diocesan approval in 1990 by Bishop Carlo Minchiatti and papal recognition on 10 January 1998 by His Holiness St. John Paul II.

Observing a Franciscan spirituality, our goal is an apostolate of Franciscan renewal through the spread of devotion to the Immaculate. The Institute is now present on almost every continent. At the beginning of the 21st century, the friars, constantly advancing, gathered about 300 professes. In 2010 there were 352 religious in 55 houses, 24 of them in Italy. There were more than 120 novices in 2009.

In Benin we have two religious communities: Allada in the south and Bembèrèkè in the north.  Since 2006, the friars have been animating the Shrine of Our Lady of Peace in Bembèrèkè, a Marian diocesan site of N’Dali. Every year we receive about 3000 pilgrims. We have rooms and dormitories that can accommodate groups of about 50 people. We conduct spiritual retreats and provide spiritual direction to the faithful.

In fact, according to Father Alfonso M. BRUNO, then rector of the Shrine of Our Lady of the Divine Mercy of Allada and director of Radio Immaculate Conception, the idea of implanting in Bembèrèkè was born from the intention to make the institute present as well to the north of the country. To have a reference point and logistical support, a technical platform also for Radio Immaculate Conception that since its genesis has had this national vocation. But being in Allada in the south, he could not respond with some efficiency to the handling and accompaniment of the points that were and are located in northern Benin. Thanks to the friendship, esteem and frank collaboration of Monsignor Martin ADJOU, the friars have thought of Bembèrèkè. Especially considering its strategic location not far from Parakou and not far from the far northern border of Niger where the Friars wanted and want to put radio places. Also for the fact that the new interstate road was more or less accessible to the ridge, in other words the western part of northern Benin, Djougou and Natitingou. But the fundamental reason was also this Marian Shrine that existed and that conformed to our Franciscan-Marian charisma. So opened this house of formation, quieter and more pandered to the novitiate of the Friars.

A year later, in 2007, the Friars also diversified their apostolate by opening in front of the Sanctuary a house called Foyer San Maximilien Marie Kolbe, in order to help young orphans or in difficulty for their studies or whose homes and parents are very far from the coll public or private services. Every school year, we welcome fifty students.

The Community is currently made up of four friars:

Title: Guardian of the Community, rector of the Sanctuary and in charge of the training of postulants.

Title: Head of the House of San Maximilian M. Kolbe

Title: Assistant to the pre-postulants and Deputy Head of the Foyer

The Shrine of Our Lady of Peace in Bembèrèkè opens its doors to individual pilgrimages, with family or in large groups.

This place of pilgrimage has:

Its chapel whose origins date back to the 1940s

Its Marian cave, ideal environment for prayer, Marian processions, recitation of the rosary outdoors, allowing the reception of groups.

His podium of more than 3,000 pilgrims

Its monumental via crucis that undoes on a hilly space in front of the chapel until the ordeal.

The shrine, the spiritual center and its hotel welcome you all year round for a pilgrimage, in a chaplaincy group, wedding preparation group, pastoral council, recollection, withdrawal of cresima, withdrawal of first communion etc. for a day, a weekend or a stay.

The spiritual center has 3 dormitories, 7 rooms, a conference room and 5 workshop rooms, without forgetting about the chapel that is the center of the house for masses, adoration and meditation.

The friars are available and therefore attentive to your requests for accommodation and catering and will study with you the best conditions adapted to your desires.

Every evening at 18:30: Vespers, rosary and Eucharistic Blessing, except in May and October during which you have at 18:00 rosary, Marian meditation and Vespers at the cave.

There are three main meetings of the pastoral year at the shrine:

Closing of October, month of the Holy Rosary : 31 October;

Closing of the month of May, Mary’s month: May 31.

Confession and spiritual direction: Every day after Mass at 7 a.m. and in the afternoon from 4 p.m. to 6 p.m.

Remember that the sanctuary has a park and forest accessible to Scouts and groups who would like to camp there. The Way of the Cross, Calvary facilitates the organization of a whole day with different activities that can be implemented, especially for the youngest, family groups and parish associations. You can picnic quietly.

Now the steep slope that leads to Calvary has stairs to make it easier for our pilgrims, the ascent. Then arrange your visit to the Shrine of Our Lady of Peace in Bembèrèkè to take full advantage of this magnificent place of prayer and return to spiritual sources.