Serving the Mission of the Immaculate in Africa 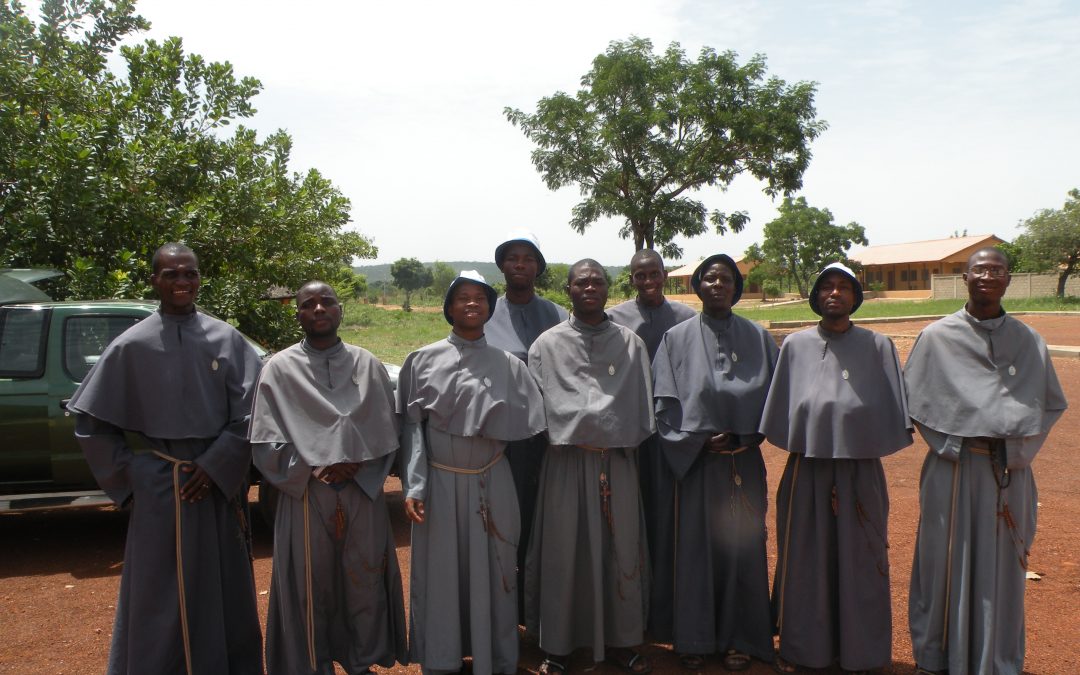 I’m a Franciscan Friar of the Immaculate since 2012 and I’m a seminarian in Rome.

Since 1991 the FI have been in Africa, specifically in Benin, Cameroon, and Nigeria.

Our work in Africa is simple: “Save lives and souls”, through the mediation of the Blessed Virgin Mary, Mother of all Nations, Mediatrix of all graces, to whom the FI are totally consecrated, In the footsteps of St. Francis and St. Maximilian. To Jesus Through Mary!

We have pledged ourselves to work together “in building up the Body of Christ, which is the Church” (Eph 4:12) by contemplative prayer and by action, to bring souls “through Mary Immaculate to the Heart of Jesus.”

For this reason, our primary task is to give Mary Immaculate to souls, to make Her discovered and known, to make Her loved by every heart, using every licit means.

So, through the whole world, and specifically in Africa we are trying:

— to organize the movement known as the “Mission of the Immaculate Mediatrix”, according to the teachings and example of St. Maximilian Maria Kolbe

— to guide and form Marian groups especially among youth, and family

— to organize and develop Marian catechesis by way of systematic instruction and also by way of conferences directed to various sectors of society (family, school, parishes, etc.)

— to organize works of charity

— to disseminate Marian publications and all that speaks of Our Lady (through bookstores, exhibits, films, audio and video, etc.)

In Africa, we are doing this hard, by beautiful work in Benin, Cameroon and Nigeria, which has produced much fruit.

In Benin, we have 2 friaries, one at Allada, and 1 at Bembèrèkè.

At Allada in Benin, every year during the weekend of the Solemnity of the Immaculate Conception of Our Lady (or during the following weekend), up to twenty-five thousand faithfuls come on a Diocesan pilgrimage for 3 days. They come to pray to their Blessed Mother.

Also, during the year, many parishes, prayer groups, and catholic schools come in pilgrimage to our shrine…

At Allada, we also have Radio Immaculée Conception, which is the Catholic radio station of Benin and broadcasts 24 hours every day and through a network of eight FM stations, reaching eight million people, in the entire nation, where radio is the most important mass media.

Its programming is meant to appeal to everybody in Benin and, while respecting the different cultures of the people of Benin, to bring them all to the light of the eternal and universal message of the Gospel, through the Mediation of the Blessed Virgin Mary, and in this way to develop and build up the civilization of love.

Our friars in Benin also carry out a Water Well Drilling Program, “A Well for Life” to give clean water to many people who don’t have this basic necessity.

We set these up so that the spigots are outside in a public area and everybody can come to have free water.

At Bembèrèkè in the northern part of Benin, where almost everyone in the area is Muslim, we have a Shrine and the biggest pilgrimage center for all the north.

We also have a St. Maximilian Kolbe House of Charity, for orphans, homeless, and needy boys.

In that house, about 60 boys (maybe 100 next year) live with us, and we try to nourish them and give them a good human and spiritual education and formation, to help them in all theirs needs.

Even though many of them are from Muslim families, we pray together and they like to serve the holy Mass, the Eucharistic Benediction, and they pray the holy Rosary.

From this many have asked to become Catholic and even remain so to this day.

Thanks be to God!

In Nigeria, we have 2 friaries, at Ijebu-Igbo and Sagamu which includes 1 parish, 2 shrines and 4 charity schools. The schools are for orphans, homeless, and the needy, totaling about 400 children in 4 different villages.

All the schools are in really poor areas, and without us, these children could not go to a decent school. In our schools, they receive a very good human and religious education, a healthy formation.

Future plans in Nigeria include building a radio station which can cover all Nigeria.

Our mission has expanded into Cameroon as well.

Our parish in the City of Douala has 3 chapels and about five thousands faithful.

Our 3 priests work very hard to minister to the faithful, each celebrating 4 to 5 Masses every Sunday.

While Our Lady’s intercession has already produced wonderful fruits in Africa, there is still more to do and we need your help.

Our most pressing concerns include the need for electrical equipment, transportation, and more water wells.

We need solar panel systems for our Radio Station at Allada.

Since 1998, we received help from the government of Benin.

But since July of this year the government stopped helping us, and now we have to pay for the electricity, which is about $2600 per month.

Currently, we are NOT capable of paying that and could lose the station, which is central to our entire network of eight radio stations in Benin.

We need financial donations to cover this bill but also to install solar power and generators, which will not only defray the monthly bill, but will give the station a second source of power during the frequent outages from the power company.

To do our hard work, we need cars.

We have only two working cars in all of Benin.

Transportation is needed for our apostolate work like evangelization and leading devotions and liturgy, for the radio station, and for our charity work.

For our charity school, many of our boys have to walk several miles to come to school.

We also provide transportation for many children out of charity which helps with evangelization, especially around our friary at Allada.

All of the vehicles need to be 4×4 (pick up trucks or SUVs), because of the treacherous roads.

Water Wells:  “A WELL FOR LIFE”

Even though the government of Benin and many organizations and missionaries are working hard to give clean water to everyone in Benin, many people are without water or only have access to contaminated water.

Lack of clean water is a source of many diseases.

Helping provide such basic necessities is a great means to open people’s hearts to the faith.

This is especially true in the arid north of Benin which is predominantly Muslim.

We also have various other needs:

Helping the Franciscans of the Immaculate in their work in Africa is a wonderful way to continue to save lives and souls and bring others closer to Jesus through Mary.

Ask Our Blessed Mother in prayer to help put on your heart how you can best impact the African Mission.

What touches your heart?

How can you make an impact?

Whether through prayer, or a donation, we appreciate your acts of charity and sacrifice.